“Dedicating this article to all lovely parents”
…the disturbing news
“23-year-old Bengaluru boy who leapt to his death from a Mumbai five-star hotel was depressed possibly over exam failure…. his father, a Bengaluru businessman, said he found his son disturbed and depressed when he met him sometimes back”
This situation is possibly due to the pressure of education and performance.  Who created this?
“Reality TV star swallows sleeping pills live on Facebook.  He had posted in a live video on Facebook late on Tuesday night, saying he is depressed with life and will not be available to anyone henceforth as friends and others were torturing him”
There were suspected issues with friendship.  This man appeared to have worried about his self-esteem.  Who was responsible for this situation?

Two different individuals, two different walks of lives, two different locations, were connected by one problem.  Frustrated about living and ultimately going through depression lead them to take extreme steps.
My heart really aches for these two who lost their lives and for their loved ones, who will be grieving the losses for the rest of their lives.
I was deeply disturbed by these incidents hence decided to understand this problem a little more.
Why is this bothering me?
I’m not only disturbed by such news but also concerned as a father of a teenager son and a daughter of 10.
Is committing suicide a solution to depressed individuals?  Will I ever in my life pushed to deal with a situation like this?
I’ve seen people living under depression with a hope that one day their life will be alright.  It’s simply unacceptable for anyone to take such extreme steps of killing themselves.
Such heartbreaking news comes every day, lives may be lost, and the news would stay in peoples’ hearts for days. The damages are permanent for the affected and their loved ones.

A few more thoughts came to me…
How many old men and women are living under depression for multiple years?
Do they have access to their own children or other close people to talk to?
Are they getting the right medical attention?
Do they have enough money to take care of themselves?
“Depression – Let’s talk”
Coincidentally around this time, on 7-Apr-2017 the World Health Day follows the theme “Depression – Let’s talk” driven by the WHO (World Health Organization)
WHO defines depression as, “a common mental illness characterized by persistent sadness and a loss of interest in activities that people normally enjoy, accompanied by an inability to carry out daily activities, for 14 days or longer”
“Depression is the leading cause of ill health and disability worldwide. According to the latest estimates from WHO, more than 300 million people are now living with depression, an increase of more than 18% between 2005 and 2015. Lack of support for people with mental disorders, coupled with a fear of stigma, prevent many from accessing the treatment they need to live healthy, productive lives.”
There are many already living under depression and thinking about taking extreme steps. Maybe, you and I are not affected now but might end up getting into a life-threatening situation like this in the future too, if things go out of control.  Or maybe you’re one like me, who is disturbed by this condition, and want to help or act and do something about this.
Many depression remedies are clinical in nature supported by a certified medical practitioner.  I’ve interacted with few who have been undergoing treatment.  Even though they are happier now, they are living under the biggest fear of getting into a deep abyss, when they stop their medication.  In general, medications could leave a lasting damage to the kidney and other vital organs leading to further complications.
I’m yet to know of any ‘depressed’ individual who has successfully recovered from this mental illness and stopping these medications, which I believe, are mere placebos.
Sources of depression & happiness
While it is easy to say that the individuals who are under depression must talk, I think the problem is elsewhere.
It is scary to imagine that many of us are contributing to depression in someone else’s life.
My Dad (who is no more), after the death of my mother, would always stay reserved and lock himself up in a room and think about the loss.  Even after many years, he couldn’t accept it.  Adding to this, he also had a terrible experience of fighting through a stage 3 bladder cancer.  After a painful cystectomy procedure, he had to live through the horror of carrying an Urostomy bag around his belly for many years.  He never was interested in public events and it was extremely hard for the rest of the family members to really understand how he was fighting these feelings.  On many occasions, he’d call me and say “Kannan, just touch me and sit next to me, you can continue to do your work and I don’t want anything else from you!”
There were great moments in his life through these depressing years of illness.  He was at his best with the company of friends and relatives talking loudly and cracking jokes.  He would get extremely excited to talk to people and even start his preparations for their arrival, days or even weeks before.  I had the happiness of taking care of him during his old age along with the best support of my elder sister (who again was a cancer victim and fought through the monstrous disease at a very young age), my caring wife and two kids. The years we all lived together had certainly helped him overcome his loneliness and loss of self-esteem due to his illness and surgery.
Aren’t there many parents, sisters, brothers and friends around us, who possibly are going through a situation like this?
What can we do?
Exercise!
It is such a beautiful word and an easy answer to many complicated diseases. Exercise is an important source of happiness and wellbeing for everyone who follows a routine.
(Source: sciencedirect.com) “There are several studies proved that often exercises are more effective than medication in treating depression.   Exercise is the best medication for depression because it stimulates the release of brain chemicals that improves your mood (ask a runner who finishes any running event). The key is to commit to an activity program will kick start the prevention process – also the recovery if you are already depressed
(Source: mercola.com) A study was conducted designed to test whether exercise is an efficacious treatment for mild to moderate major depressive disorder and the dose-response relation of exercise and reduction in depressive symptoms.  The outcome summary of the report as written in the mercola.com says,
..anything else?

I’m left with the puzzling thoughts of how the next generation of kids will lead their life going through the evil this society offers, and how they will deal or succumb to the difficult situations that may arise in their life.
5 important things that I have decided to have in my life to lead an exciting life!

Let’s prevent our next generation from getting through depression and let’s fight depression together! 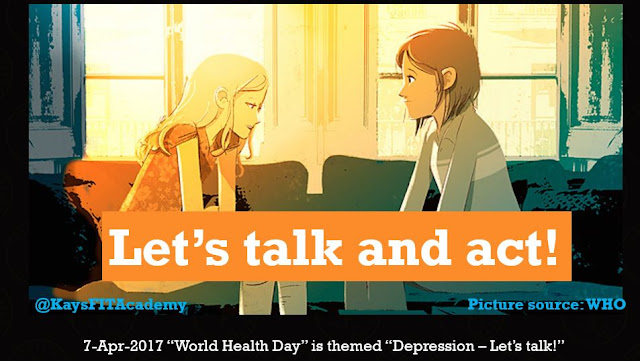 About the author:
Coach Kay is an ACE Certified Personal Trainer and an ultra-marathon runner with an experience of running 60+ Marathon/Ultra marathons; After 24 years of working across engineering and software industry, he has established KaysFITAcademy (www.kaysfitacademy.com), an institution with a passion for transforming individuals for discovering the best in them.  He is a guest speaker in institutions and

Kay is also a social entrepreneur and founded SahayaLRTS, an NGO which promotes and builds awareness on road safety through its campaign “Be Safe! Be there to Save!” & #424242running.
Being an avid fitness enthusiast and a running coach he has been successfully helping many individuals (beginners to Ultra Marathoners, couch potatoes to fitness freaks) to realize their running, personal health & fitness goals
KaysFIT Academy Home | Facebook
Editorial credits: Meera Kannan, Aditya Kannan
Categories: blogKays Personal BlogRunning, fitness, nutrition & wellness

Lessons I wish I knew before running the Comrades Marathon

This is a recorded Zoom session on Marathon Running & racing strategies with Coach Kay hosted by Srikanthan & Sujoyjeet, on behalf of the IIT Alumni network running enthusiasts located in Singapore and India. Recorded Read more…

You have never seen anything like this during your lifetime. The COVID-19 has started showing its true colors. Not only has the virus spread across continents, but it has been killing thousands of people. Keep Read more…