On 31-May-2015, I’ll be running the Comrades Marathon (www.comrades.com), an Ultra Marathon between Durban and Pietermaritzburg (PMB) – also called the Up Run, in South Africa. Last year, despite the best of preparations for the Down Run (from PMB to Durban).
“Lack of will, injury, or blunt tools at the start of the battle are the biggest failures than fighting the battle and losing”
I was at the start line of the race with a calf injury which surprised me a month before the race day. All my attempts to fix it before my travel were futile.  At the beginning of the race the injury appeared to be under control but I started experiencing severe pain in my foot (mostly a referral pain) from the 20k mark and I could endure only till the half way mark before pulling out with a heavy heart.  After the race I had an extended and a memorable vacation with my family in South Africa.   But the experience was truly remarkable I had decided to come back again for the 2015 race.
Now a year behind me and I’m all geared up for the big Comrades Up Run.  The race is run on the hilly roads of Kwazalu-Natal province, marked by “The Big Five” which are Cowies Hill, Field’s Hill, Botha’s Hill, Inchanga, and Polly Shortts.   Durban city is located at the sea level and one has to run around 44 kms up in the hills to reach the half-way point.  The remaining distance is run much on rolling hills before reaching Pietermaritzburg.  This year, the officials have increased distance by 877 meters (making it 87.7) due to some road construction work making race longer and more challenging for many runners.

History of Comrades
Vic Clapman founded Comrades Marathon in 1921 – he felt that if infantrymen, drafted into the armed forces from sedentary jobs, could endure forced marches over great distances, trained athletes could cover the distance between the two cities without great difficulty…more here..

Pic: Comrades Up run elevation profile
About the race
Comrades will celebrate its 90th anniversary this year and the race organizers have allowed 23000 runners to register (usually ~18000).   Statistics say that a majority of runners finish the race either just before the 11 hour time mark and the rest just before the 12th hour.  At the start point in Durban it takes 8-10 minutes for the last runner to cross the start line.  The race must be run within 12 hrs. gun to gun time (5.30 am to 5.30 pm) and has multiple cutoff times in between to qualify.  The runners who don’t make it to any cut off point within the cut off time published are pulled out of the race.  This is certainly not the best part of this race and around 85% of the runners conquer the grueling race on that day.  The top men and women finishers are expected to complete in 5 hrs 30 mins and 6 hrs respectively.  They are some amazing athleticism is displayed on that day and the race is live telecasted and watched by millions across the world.  Dave Rogers has the distinct honor of completing 45 Comrades marathons and Bruce Fordyce and Elena Nuralieva top the list of finishers with 8 gold medals to their list.
Comrades medal system
see more facts here…

Every year the number of participants from India is growing and this year there are around 65 runners registered.   Amit Sheth has the distinction of being part of 6 consecutive years since 2009 and also recognized as the Indian Ambassador by the Comrades Marathon Association.  Sathish Gujran from Mumbai has completed 5 Comrades topping the list of most Bronze medals winner from India.  In 2014, Ashok Nath from Bangalore became the fastest Indian (8 hrs 43 mins) to finish the race ever.  Interestingly both Sathish and Ashok are in their 50s age.  Aravind Kumar from Chennai is the youngest (at the age of 27) Indian to finish the Comrades Marathon in 2014.

My training for the 2015 Comrades 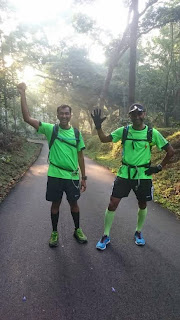 First thing I did after I returned from my 2014 Comrades race was to stay away from running for about 2 months.  The rest and recovery helped me get back to shape and I focused on modifying my training plans.  I further indulged in running, injury and fitness related research.  I worked on my basics, the mistakes that I decided not to commit, my running posture and speed techniques.  I became very selective about the races that I ran and focused a lot on quality work than quantity.  I started my Comrades training on the first week of 2015 and during the 5 months I cut down my weight (chopped 6 kgs off), built core, strength and power; cross trained by swimming and cycling and ran 1000+ kms during the last 5 months.  I cut down my running mileage by 30% from 2014 and I did 3 long runs 50 kms, 55kms and 67 kms in Yercaud and Kolli hills to simulate hill running.  All the three long runs were completed with my running friends especially the popular Chennai Runner buddy Praveen Giriya who is making his maiden Comrades this year.

Someone once said “If we wait until we’re ready, we’ll be waiting for the rest of our lives”

Is that enough to finish the Comrades?  Am I in best shape to complete this time? I have the nudging feeling that there is always something more could have been done and there was nothing like a perfect training.  My wife my children, had provided me the best support and had sacrificed several weekends including their summer vacation trips.  The race day would determine the quality of my training and I’m expecting the extra spirit the energy, inspiration that I can draw from other runners, the crowd throughout the road and the best wishes from my friends and family to take me till the finish line.  This final month is a taper time and I’m feeling very confident to finish this year successfully. 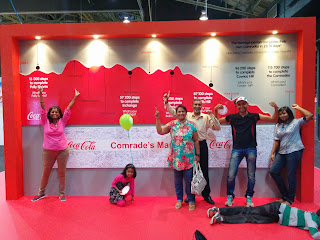 Pic: remembering 2014 Comrades @ the expo…with my extended family from SA, Sam (a veteran Comrades marathoner), Devi, Rose, my son was on the ground imitating how one would feel after completing the race 🙂
Why run Comrades?

Watch the Spirit of Comrades 2014 video here
Vall Opperman, Comrades finishers, has shared a plaque given to her by a friend which had beautiful words inscribed in it.

“There is a defining moment in each person’s life when the true measure of who they are is tested.  They will be judged, and more importantly, they will judge themselves on how they answered in that moment of truth.  On Comrades day that moment has arrived.  You can no more escape your moment of destiny, than you can recapture it, once it has passed.  You have the opportunity to define absolutely who you are.  Seize your moment for greatness, knowing that when your time of judgment came, you were not found wanting”

Now you probably know, at 41, why I would spend a lot of time, money to train and to go to a different country, run a race for 12 hours and at the end completely drained, mentally & physically and have to endure a lot of pain.

Above all there is a wonderful chance to instantly connect and start an endless discussion as if you were buddies for ages, with another human being, doesn’t matter which color, which race he or she belongs to, what age, what the mother tongue is, which country he belongs to……. the list is really long – salute to all the runners.

I invite you to join the endurance club to experience the following but all the 4 stages to attain enlightenment….that include Physical, Mental, Emotional and Spiritual.
Well, I’m all set to go, the final preparations are complete and less than a week count down has already begun.
At the end of it just sounds like the beginning.

“Living in anticipation for having #eachDay2BeTheFirst brings excitement; It resets the feeling that surprises surprise even the experienced”

‘Be Part of It – Bamba Iqhaza’ is the 2015 theme for the Comrades Marathon.

‘Ill be part of it – Ngizo Bamba Iqhaza’ and feel like I’m proudly representing my country!!! 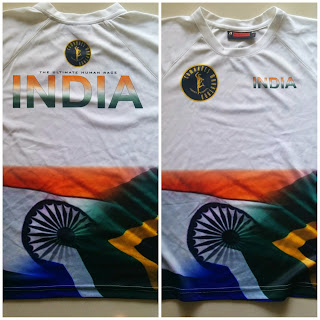 Also, do you want to know if running would make you a better employee?  read my thoughts here…