How many scissors are you holding in your hands right now? 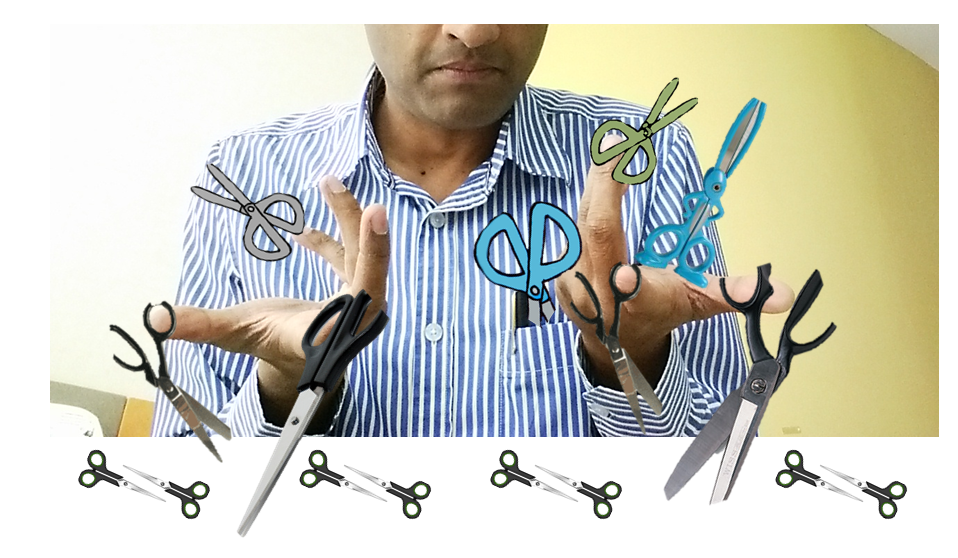 Early in a morning, I was walking through a large house with several rooms, one leading to the other. There are various random things lying on the floor. Paper clips, tooth brush, electronic gadgets, flowers, dry leafs, pencils and scissors. All the rooms are cluttered with similar things. While walking, the only thing that pulls my attention are the pair of scissors. They appear in different sizes and shapes; a variety of them; could be a really attractive collectible. I decide to pick all of them.
Bending down over and over I pick up several pairs…; carefully filling my pockets, grabbing them in my hands; in between my fingers; also holding the largest one that is used for trimming plants in between my right hand and chest. After a while, I’m passing through a long corridor and at the end I see a large door which appears to be an exit. I decide to go through it. After going closer to the door I find it to be locked. I don’t find a door handle or even a bell to ring. Since my hands are full, I lean forward and knock the door with my elbows but with a struggle; the door doesn’t open; I’m trying again and again and the door doesn’t open.
I suddenly realize that I was doing something wrong. Feeling of guilt and shame. The scissors don’t belong to me. None of them. “my God! what did I do?” “How can I be greedy to pick something that doesn’t belong to me?”.
At that moment, I decide to dump them right at the doorstep and try knocking the door, but wanting to be much more responsible, I decide to keep them back in the same room where I picked them. I’m now walking back, room to room, but at the same time going through a state of confusion. I don’t remember where I picked the scissors from. After thinking and squeezing my brain with despair I decided to keep one in each room, randomly.
After a little while, I’m back at the same door step, feeling a big sigh of relief, finally expecting the door to open this time. I knock the door gently with my knuckles, with lot of hope, once, pause… hearing no response, the second time…pause….no response…and the third time…pause again. After my third knock, I hear a deep voice….”Did you keep the scissors in the same room where you picked them from? the door will open in 10 minutes if you have done this”
How did I get into this trouble? how can I get past this door? a sudden rush of fear sets in me. Talking to myself I realize that In those hurried moments I never bothered to know from where I picked what. Knowing the time is running, I frantically run back, going room to room to check and remember if everything was kept in order.
I go through all the rooms, one after another and finally thinking that I did a good job of moving and shuffling the scissors into their respective places. Time is running… 2 more mins to go, thinking everything has gone right, I sprint to get to the door, with some familiarity of standing there…with regained hope I started knocking, first knock….no response….second …no response…..taking a deep breath the third one….sweating and panting….awaiting with so much anticipation for the door to open…and then suddenly I hear some music…starting really slow…and in a gradual progression the volume is going up….slowly and slowly up and up….my phone alarm goes off at its full volume….
good god….! everything was just a dream!!!
I have been thinking about this weird dream of clippers; since morning; while brushing my teeth; while having breakfast; while driving to work and also during the entire day. Puzzled by how the brain can process our habits, behavior, fear, joy etc., and dream. It sounded really spooky to me. I started asking many questions like why this dream? why scissors? was it connected with something in my own life? what is the real meaning behind this dream? what can I interpret from this? what can I learn from this?
May be I’m not completing my job very well; may be I’m not organized; may be I’m doing things that I’m not supposed to be doing; may be I’m believing no matter what I do the doors will open; over confidence? over doing? may be I should have picked something else lying on the floor instead of those scissors….or may be even I have deep connection with the magical modern fairy tale of Johnny Depp’s dark fantasy movie Edward Scissorhands, story of the uncommonly gentle man, with his hands full of scissors falls in love with a beautiful girl. and on and on…
At the end, I’m glad that a pair of scissors, put in a metaphoric language, can alter my believes and provoke some fresh thinking – time to really look back and see how many scissors are in my hands now.
How many scissors are you holding in your hands right now?
How many scissors did you ever put back in the same room where you picked em from?
What was your dream today and what did you discover from it?
p.s I googled to find if anyone really collects scissors and to find an associated English word for this hobby.
I came across an interesting blog Scissor Stuff written by someone who is passionate about this useful tool. Wikipedia’s List of Collectibles section doesn’t have any mention on collecting Scissors. Time for Merriam Webster to introduce a new word 🙂 or do you know what it is?
Categories: blogKays Personal Blog

Lessons I wish I knew before running the Comrades Marathon

This is a recorded Zoom session on Marathon Running & racing strategies with Coach Kay hosted by Srikanthan & Sujoyjeet, on behalf of the IIT Alumni network running enthusiasts located in Singapore and India. Recorded Read more…

You have never seen anything like this during your lifetime. The COVID-19 has started showing its true colors. Not only has the virus spread across continents, but it has been killing thousands of people. Keep Read more…